Reading: Psalm 35
(Verses 11-16)
Ruthless witnesses come forward;
they question me on things I know nothing about.
They repay me evil for good
and leave me like one bereaved.
Yet when they were ill, I put on sackcloth
and humbled myself with fasting.
When my prayers returned to me unanswered,
I went about mourning as though for my friend or brother.
I bowed my head in grief as though weeping for my mother.
But when I stumbled, they gathered in glee;
assailants gathered against me without my knowledge.
They slandered me without ceasing.
Like the ungodly they maliciously mocked;
they gnashed their teeth at me (NIV). 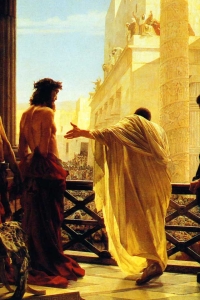 Reflection
There is a prophetic, messianic element to today’s Psalm 35 reading. This psalm is attributed to David, and historically on several occasions, close friends viciously turned on David. During Absalom’s rebellion David was betrayed not only by his son, but also by his confidants, who repaid his kindness with evil. He was openly mocked and tormented by Shimei, son of Gera, as he fled Jerusalem. See 2 Samuel 16:5-14. Though this is part of David’s experience, this psalm portion also has its prophetic fulfilment in the slanderous betrayal of Christ.

Matthew records that, “The chief priests and the whole Sanhedrin were looking for false evidence against Jesus so that they could put him to death. But they did not find any, though many false witnesses came forward” (Matthew 26:59-60).

After being betrayed by Judas, his own disciple, Jesus was mocked, stripped and beaten by Roman soldiers (Matthew 27:27-31). While nailed to a cross the crowd hurled abuse at him. In the same way the chief priests, the teachers of the law and the elders mocked him. “He saved others,” they said, “but he can’t save himself! He’s the king of Israel! Let him come down now from the cross, and we will believe in him. He trusts in God. Let God rescue him now if he wants him, for he said, ‘I am the Son of God.’” In the same way the rebels who were crucified with him also heaped insults on him (Matthew 27:41-44).

The shrieking crowds of hell heaped abuse onto our Savior. Those same demonic crowds are ready to hurl their accusations at us when we stumble. Satan, our accuser, delights in tormenting us by bringing up the sins of our past. He mocks our efforts at change, insisting that it can’t be done. But he is wrong—dead wrong.  I can do all this through him who gives me strength (Philippians 4:13).

The Accuser only has power over us if we listen to his lies. Our victory is in the risen Christ!

Response: Jesus, you are my victory when the enemy accuses me. I put my trust in your redeeming blood. Help me to stand firm against the taunts of the enemy. Amen.

Your Turn: Have you put your trust in Jesus? He can change a wayward heart.

1 thought on “Victory over the Accuser”