In today’s reading, Marcus is in conversation with his nephew, the young soldier Claudius. Claudius is reporting on the activities and the message of Jesus of Nazareth on Tuesday of Holy Week.

Claudius went on. “One thing I do know for sure: those fancy-robed religious leaders don’t like him much. Jesus had taught for a while this morning, when all of a sudden the high priest, along with maybe ten other officials, came marching in. They demanded to 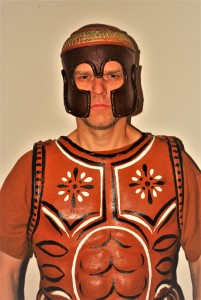 know by what authority he was doing these things. He didn’t answer them, but instead he asked them a question. He asked them, ‘By what authority did John baptize?’ They talked it over and then said, ‘We don’t know.’ So he said he wouldn’t answer their question either. They just turned around and left in a holy huff. You could really tell the crowd around Jesus just loved the way he handled these high and mighty holy types.” Claudius abruptly turned to me and asked, “Who was this John anyway?”
“A few years back he caused quite a stir. Thousands of people went out to the Jordan River to hear him. He insisted that people repent, turn from their sins, and then he would baptize them in the river. Even some of my own men went out to hear him. In the end, Herod the tetrarch had him beheaded.”
After reflecting a moment on the day’s events, I caustically commented, “That bloody old Fox hasn’t changed much.”
“Anyway,” Claudius continued, “from then on Jesus would teach for a while, and then some new high-powered delegation would arrive to question him. They weren’t sincere in their questions. It was like they were trying to trap him into saying something they could later use against him. That’s all I think they were after. But in the end Jesus always turned the tables on them. He exposed their real motives. He saw right through them.”
I felt a certain remembered discomfort when Claudius said those words. After all, Jesus’s eyes had shone a light on the darkness of my own soul. I don’t know why I felt so naked, so transparent before this man.
“But, Claudius, what makes you so sure he’s not here to kick out the Romans?”
“It was the way he answered one of those fancy-robed delegations. They asked him if it was lawful to pay taxes to Caesar. He called them hypocrites right to their faces. He accused them of trying to trap him. Then he asked for a coin. He demanded to know

whose portrait and inscription were on it. When they answered, ‘Caesar’s,’ he jumped on them—like a cat onto a nest of mice. ‘So give back to Caesar what is Caesar’s, and to God what is God’s,’ he told them. Even at a distance, I could see their mouths drop and their ears catch fire. They left like cowering dogs with their tails between their legs.”
Claudius became even more animated as he said, “The crowd—the crowd loved it. You could really tell the people loved seeing those phony religious officials get a taste of a little humility. I’m sure they haven’t tasted it for a good long while.”
Then to conclude, he said, “That’s why I don’t think he’s a threat to us. He’s not opposed to paying taxes. Nothing he said all day makes me think he’s got a quarrel with Rome. But he’s sure got the religious leaders worried and bothered. Later in the day he went after them full force. Called them hypocrites, blind guides, a brood of vipers!”
“Ooo! I’m sure they were pleased,” I said sarcastically.
This assessment confirmed what Renaldo and I had been thinking. I had heard the same thing reflected back to me by Flavio. This latest evidence on taxes lent considerable weight to the conclusion Claudius had drawn. But I still felt uneasy. Jesus simply struck me as such a huge, larger-than-life figure—the kind of person you don’t dismiss lightly, no matter what others say. I somehow felt that all we had done thus far was scratch the surface. I’m not sure I really understood him at all. How could I begin to fathom what he was trying to accomplish?